The Pac-12, also known as the “Conference of Champions”, currently has 12 members coming from several states including Arizona, California, Colorado, Oregon, Utah, and Washington. Just like other Power 5 conferences across the country, the Pac-12 has quite a few entertaining and very unique traditions. In celebration of “Rivalry Week”, CollegeWeekends.com takes you on a tour of some the most well-known in the conference.

The University of Washington Huskies have a unique tradition called “sailgating” in which Husky fans tailgate from boats in Lake Washington. The lake is right behind Husky Stadium, so fans can experience the stadium noise directly on their boats. 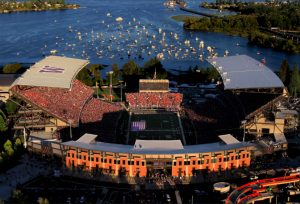 The tradition has been occurring since 1920 and each year fans flock to Lake Washington to celebrate before the big game … and on sunnier game days, fans can truly enjoy the majestic beauty of the Pacific Northwest with the Cascade Mountains and Mount Ranier visible in the distance.

The University of Colorado’s “Ralphie the Buffalo” takes two laps around Folsom Field at the start of each half of the football games. Ralphie is not a person in a costume, but a real buffalo! Ralphie can reach up to 25 miles per hour, but with the help of “Ralphie Handlers,” she doesn’t get too fast! 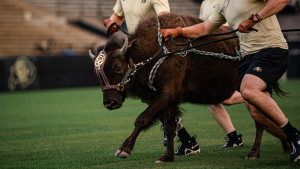 The tradition started in 1934, but Ralphie herself didn’t become a household name until 1966.

Starting in 1961 in a game against Georgia Tech, a Trojan Warrior rode onto the field horseback. The horse, whose name is Traveler, is now in its seventh generation. 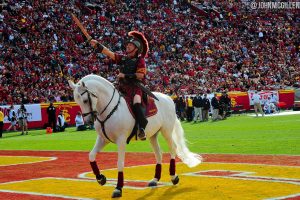 Traveler does not carry Tommy Trojan, the university’s mascot, but instead carries a Trojan warrior who helps get the fans ready for the game ahead!

The USC Song Girls are a renowned spirit and dance team at USC, founded in 1967. Not to be confused with the USC Cheerleading Squad, the team came about when 7 students started the tradition of performing choreographed routines to the soundtrack of the USC marching band. 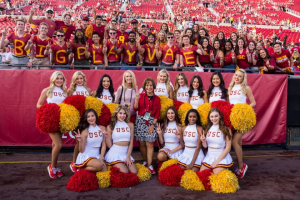 While the team may be made up of 12 members now instead of 7, the song girls’ uniforms are still exactly the same, making their team incredibly unique!

Tightwad Hill, known officially as Charter Hill, is a hill formed from dirt excavated during the building of the stadium. University of California Berkeley students who either want a unique view of the stadium or don’t want to pay for tickets can find seats on Tightwad Hill. 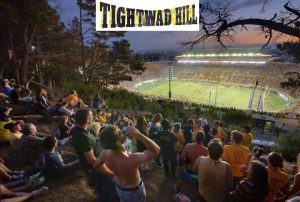 The hill has been functional since 1924 and students have been finding ways to have fun on the hill ever since.

The Washington State Cougars have been flying a Cougars flag, known as “‘Ol Crimson” on College GameDay’s TV set for nearly two decades! Since 2003, ‘Ol Crimson has made its appearance on every College GameDay show, for a streak of 285 shows (as of November 19, 2022). 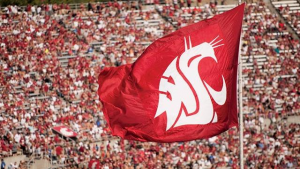 It started as an effort to woo ESPN to bring GameDay to Pullman, WA, but has since become much more than that. The flag even has its own Twitter account with a bio that reads, “In 2003, I appeared on ESPN College Gameday in support of my Cougs. It was so much fun, I just keep flying.”

The Leland Stanford Junior University Marching Band or the LSJUMB was founded in 1893 and has been joking with opposing teams, fans, and coaches for the entire 129 years since its founding. 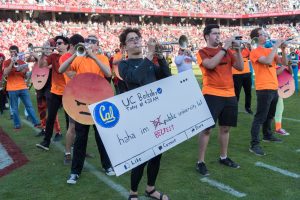 The marching band is famous for its political satire and musical skills. For a real laugh attend one of Stanford’s games and see the LSJUMB in action!

The University of Arizona’s official slogan is “bear down” which you will find all over Arizona’s campus. The slogan began in 1926 when Student Body President, Button Salmon, was critically injured in what would be a fatal car wreck. 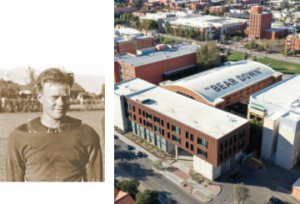 He was also the starting quarterback for the Wildcat football team and the catcher for the Wildcat baseball team. Salmon’s final words to his football coach while he was in the hospital were, “Tell them … tell the team to bear down.” Today, his final words are used as a rally cry to embody the spirit of the university and its athletic teams at sporting events.

The University of Oregon’s mascot enters Autzen Stadium in style every home football game. Leading the football team out of the tunnel rides the Oregon Duck on top of a motorcycle! 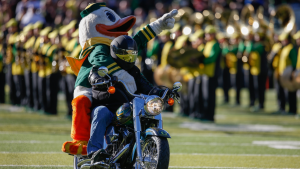 This is an iconic entrance that gets the crowd going every time!

UCLA’s famous bleachers can be seen from far away due to the flashlights that have been attached to them and are used for card stunts. But back in the 1930s, light stunts became the trademark of the UCLA rooting section.

This tradition started in 1935 with wired lightbulbs, with each student receiving four light bulbs of a different color. These lightbulbs were eventually replaced by flashlights in 1953 due to cost and logistics issues. UCLA students developed a card similar to the type used in ordinary card stunts with eight different light filters placed in a circular pattern, and each student was given a flashlight to shine through the filters. The lights make for a special atmosphere in each game!

One of the easiest ways to recognize the Arizona State Sun Devils fan base is the “Forks Up” hand sign. “Forks Up” is the universal sign of ASU pride. Made by putting your ring finger and thumb down, the sign resembles a Devil’s Fork on your hand. 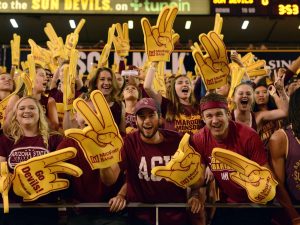 If you’re watching or attending an ASU sporting event, you’re sure to see (and hear) the Sun Devils fans sporting the “Forks Up” hand sign.

Make your next college town visit special with the help of College Weekends lodging, rentals, and city guides!