The Big 12 Conference stretches from Waco, Texas all the way to Morgantown, West Virginia and boasts some of the most rabid fan bases and plenty of great traditions. Formerly the Big 8 and renamed in 1994, the Big 12 Conference features fifteen sports including basketball, baseball, football, cross country, golf, and several others. With storied programs, the conference touts several traditions that are sure to excite all sports lovers.  CollegeWeekends.com explores some of the very best and most unique traditions within the Big 12 conference.

Because Baylor University’s mascot is a bear, students often mimic the animal on game days. Students raise their “bear claw” in the air and shake it while shouting “hey.” Then students shout “sic ‘em” as they bring down their “paw” as if slashing their opponents. Finally, students raise their hands again and shout “bears” to cheer on their home team and intimidate their opponents!

During Cyclone football games, the Alpha Sigma Phi Fraternity shoots a cannon after every touchdown or field goal. This tradition started in 1967 when the fraternity brothers raised money and put in many hours of work to create this well-loved cannon and tradition. The next time you are watching an Iowa State football game, keep your eyes peeled for a cloud of smoke at the Iowa State end zone! 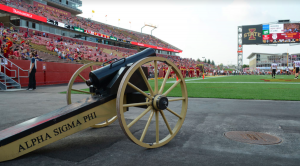 University of Kansas – Waving the Wheat

At the University of Kansas football games, students and spectators will “wave the wheat” after a touchdown. The crowd raises their arms and waves back and forth, mimicking the motion of a wheat field and paying homage to the nation’s largest wheat-producing state! 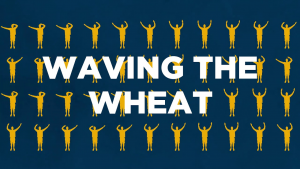 Kansas State sports games are home to the Wabash Cannonball. The Wabash Cannonball is a peppy song played by the Pride of the Wildcat Land band and often entails Kansas State fans moving in synchronized motions along with the music. It’s a tradition that is sure to be enjoyed by devoted fans and newcomers alike. 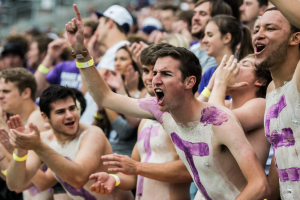 Many universities have spirit squads or cheerleading squads to bring up crowd morale, but the University of Oklahoma RUF/NEKS takes a more unique approach to the tradition. The RUF/NEKS can be seen riding onto the OU football field on a covered wagon or holding paddles and rifles that are colored in the school’s traditional red and white. This spirit squad is not your average group of enthusiastic students and will make any OU sporting event exciting. 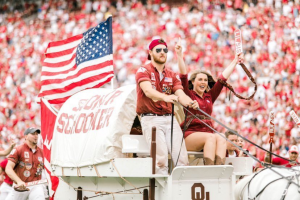 OSU’s Paddle People may not sound intimidating until you hear the echoes of 130 paddles hitting a padded wall. The Paddle People make themselves known in between plays, during player introductions, and after the OSU first down. The tradition’s origins aren’t clear but many believe that it started in the late 1990s when students snuck a few paddles into the football stadium. 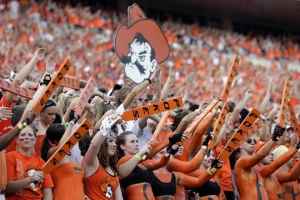 In 1896, TCU’s football program started and the football field was said to often be covered with small horned frogs, making the amphibian an obvious choice for the school’s mascot. The mascot is native to Texas and is the largest of all the horned frogs in the United States. While the mascot may appear to be an odd choice to non-TCU alumni or students, the frog’s small but mighty stature and its interesting history are beloved by the school’s students and fans. 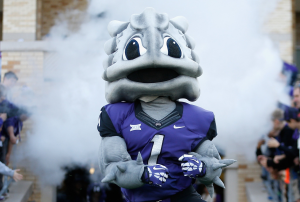 Hook ‘em Horns is a very recognizable hand signal for sports fans. UT Students and fans raise their hands and mimic the school’s mascot, the longhorn bull, by making a pair of horns. This signal is also accompanied by the words “Hook ‘em Horns” or “Hook ‘em” as both a goodbye or a chant during sporting events. Next time you’re watching a UT game, make sure to look for Hook ‘em Horns among the sea of orange and white. 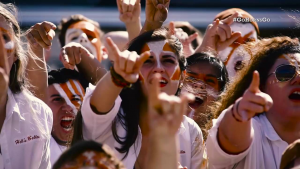 The Masked Rider of Texas Tech started as a dare among students in 1936 and was originally called the Ghost Rider seeing as the identity of the rider was unknown. The rider wears all black, a mask over their eyes, a large hat, and raises their free hand in a “guns up” position when entering the football stadium. In 1954, the rider became the official mascot and continues to lead the Texas Tech Raiders on to the football battle field at every home game. 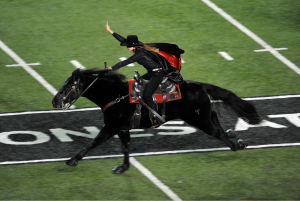 The famous John Denver song “Take Me Home, Country Roads” has been played before every football game since 1972. In 1980, John Denver even performed the song at WVU at a sold-out event. 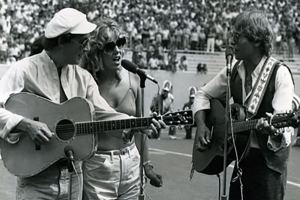 You will often find students and fans swaying along and singing to the song, all happy to be a part of the long-standing tradition.

While these traditions are great to read about, they are even more exciting to experience. To make your college visit easier, book your stay with College Weekends today!