With every college football season comes the dream of the fairytale postseason. For 4 teams, that dream starts with being selected to the College Football Playoff (CFP). The CFP determines the national champion for the NCAA Division I Football Bowl Subdivision (FBS), and this year, Michigan, TCU, Ohio State and Georgia made the cut. The two semifinal games were played on New Year’s Eve with both TCU and Georgia winning barnburner games that were decided in the final seconds. The Championship game will be held this Monday at SoFi Stadium in Inglewood, CA.

History of the College Football Playoff

The first CFP Championship Game was played in 2014 between the Ohio State Buckeyes and the Oregon Ducks, with Ohio State winning 42-20. Since then, the tournament has been largely dominated by Alabama and Clemson. The Alabama Crimson Tide has taken home the most championship trophies with three (2015, 2017, and 2020). They are followed closely by the Clemson Tigers with two (2016 and 2018). Ohio State, Georgia, and Louisiana State University (LSU) have each taken home one championship (2014, 2021, and 2019, respectively).

On Monday, January 9th, the University of Georgia and Texas Christian University, will face off for the 2023 College Football Playoff to crown the next college football national champion.

The #1 seeded Georgia Bulldogs have had an impressive season, with an undefeated record of 14-0. They will compete for their third national championship title in the past six seasons and aim to win back-to-back championships for the first time in program history. 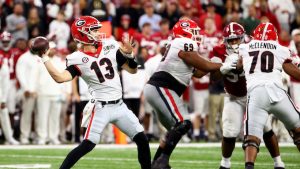 The TCU Horned Frogs on the other hand are the Cinderella story of the college football season. TCU is the first team to enter the season unranked and then go on to make the national championship game.  They entered the playoff as the #3 seed, boasting a 13-1 record – their only loss to Kansas State in overtime of the Big-12 title game in early December. This season’s story is quite the turnaround from last season, as the Frogs went 5-7 and fired the winningest coach in program history. 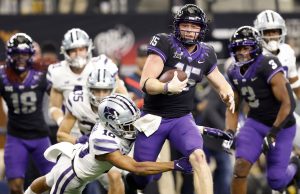 The Georgia Bulldogs remain a favorite amongst many experts as they’ve dominated opponents all season, however, the heart and momentum of the TCU Horned Frogs could make things interesting. The showdown Monday night between these two teams should be one to remember.

We’ve called on one of our very own board members here at CollegeWeekends and college football expert, Josh Booty, to share some career experience from his playing days – both collegiate and professionally, and to make his pick to win it all. 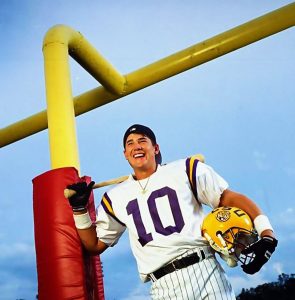 Josh is a former multi-sport athlete, playing both professional baseball and American football. Drafted in the 1st round out of high school, Josh made it to the big leagues as a third baseman for the Miami Marlins.  After returning to LSU after a short stint in the MLB, Josh played QB for the Tigers and in the NFL with the Cleveland Browns. 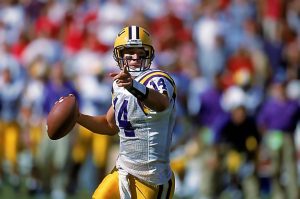 Josh shared with us some of his most memorable career moments spanning his collegiate and professional athletic careers. He recalls starting as third baseman for the Marlins on the 1997 Opening Day of the MLB as one of the highlights of his professional career. A collegiate career highlight was back in 2000 when Josh was selected as the All-SEC Team quarterback, being the first LSU quarterback to be given that honor since Tommy Hodson in 1987. Josh is very proud and grateful to have been drafted in both the MLB and NFL, as very few athletes are multi-sport athletes and even fewer have the opportunity to compete professionally for multiple sports. 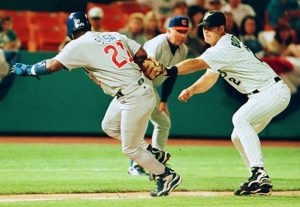 Josh’s pick: Josh has Georgia taking home the win – although he’s not underestimating the Horned Frogs – and believes the game could be closer than predicted (Georgia is currently a 12.5 point favorite).

The 2023 College Football Playoff National Championship will take place on Monday, January 9th, at 7:30 pm ET/4:30 pm PT at the SoFi Stadium in the Los Angeles suburb of Inglewood, CA. The #1 Georgia Bulldogs and the #3 TCU Horned Frogs will face off in an electric battle for the title! The game will be broadcast on ESPN. 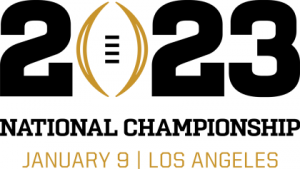 If you’re headed to the championship or already planning trips for next season, be sure to check out College Weekends for places to stay and things to do while visiting college towns!