Ole Miss is known for its impressive pregame celebrations that take place at The Grove, or the center of campus. The Grove is well-known and was once referred to as “the Holy Grail of tailgating sites” by Sporting News. Thousands of fans attend these famous tailgates and often bring tents to house their food and drinks creating a colorful canopy. Ole Miss Athletics also sells parking passes for RV parking if fans want a more permanent tailgating experience.  Also and as they say, when tailgating in Oxford … don’t forget your hotty toddy! 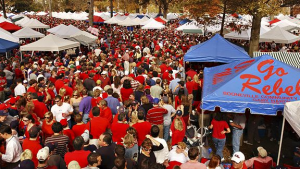 South Carolina Gamecock fans have a unique way of tailgating during game days that involves abandoned train cabooses. There are 22 decommissioned cabooses that serve as tailgating units for dedicated fans on game day. These cabooses have been playfully nicknamed by fans as “Cockabooses” after the School’s mascot. While it may be difficult to secure a spot in a “Cockaboose” there are plenty of fun traditions, food, and drinks that are sure to make your tailgating experience a good one. 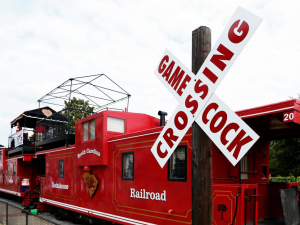 While the University of Tennessee may be best known for its classic orange and white colors, it is also known for its incredible tailgates. Because the college’s stadium is located near a river, fans who own boats can experience tailgating in a whole new way. These tailgating boats became known as the Vol Navy in 1962 when Vols sports announcer George Mooney began traveling to football games by boat. Clearly, if you attend a Vols football tailgate, you don’t want to miss this unique experience! 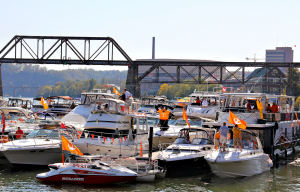 As part of the football-crazed SEC, LSU draws a large group of tailgaters for every game. LSU is located in Baton Rouge and home to amazing Southern, Cajun, and Creole-style food. You will find food like shrimp and grits, gumbo, jambalaya, and Muffuletta sandwiches as well as excited fans in RVs waiting for the Tigers to take the field. Even more impressive, thousands of fans who were not able to get in to the game … continue to tailgate outside of the stadium throughout the game as well. 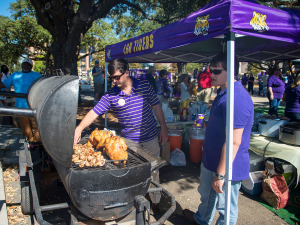 The Washington Huskies take tailgating seriously. Huskies fans not only have the hallmarks of a good tailgate such as food and drinks but they also have boats and lots of them! The University of Washington has “sailgating” where fans either use their own boats or rent boats and dock them in Husky Harbor which can hold up to 150 boats. It is truly a unique tailgating experience where fans celebrate and prepare for the upcoming game with music, food, and drinks directly from their boats! 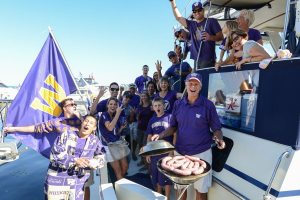 While food is a must-have for any tailgate, the University of Oklahoma takes this to another level. On game days, it is highly likely you will see many Sooner fans smoking pork, ribeye or brisket. Oklahoma tailgates are not only home to amazing BBQ but also the SooneRVillage. SooneRVillage is a hotspot for tailgaters and mainly houses RVs but also offers shuttles to and from the stadium. 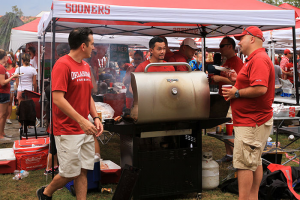 Ohio State fans fully understand tailgating and make sure they are well-prepared for any Buckeyes football game. Tailgating is officially allowed to start “two days before the game” and fans take definitely take advantage of this for an extended party on game day weekends!  Ohio State tailgating is also known for great the hospitality Buckeyes fans offer provides for visitors. If you’re visiting for the first time or from out of town make sure to bring extra food and drinks and join the party because you are sure to make a few friends while tailgating! 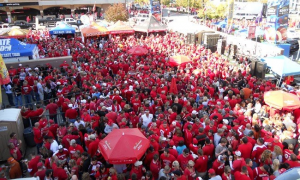 When tailgating at Clemson be prepared to be engulfed in a sea of orange! Clemson fans take tailgating to the next level with their apparel, team spirit, and amazing atmosphere. The Tiger Walk is an impressive and electric experience and must see when attending a Tigers game. Players will walk into the stadium and greet fans while the Tiger Band plays. Additionally and somewhat unique to Clemson tailgates is the fact that the stadium allows fans to walk in and out of the stadium so you can experience both tailgating and the game simultaneously. 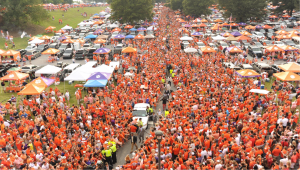 The University of Iowa was originally ranked No. 1 in the Big Ten for tailgating in 2018 by 24/7 Sports. While they have moved down to number 9 this does not mean that their tailgates have become any less exciting! Iowa tailgates are known for two things; turkey legs and the Hawk Walk. Large turkey legs are sold at many different tailgate vendors throughout the tailgating area. The Hawk Walk is also a must see and where players and coaches walk from their buses to the stadium while fans cheer and celebrate their arrival. 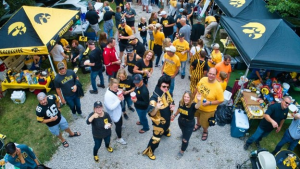 Cornhusker fans can enjoy a diverse atmosphere of Nebraska tailgates. The University of Nebraska offers tailgating in several locations including the party at Pinnacle Bank Arena, Husker Nation Pavilion, the NZone, an underground bar nearby, and the Embassy Suites Bar & Grille, which hosts a party called “Do the Dock.” Nebraska is also home to traditions including the Unity Walk, where Husker players and coaches walk to the stadium while fans cheer as they get amped up for the game. 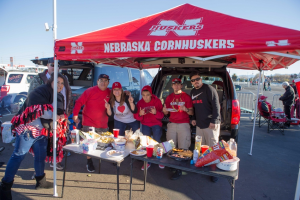 At Penn State football tailgating is huge. Fans flock from all over the state and country to support the Nittany Lions. A key added element of any Penn State tailgate is bar hopping either before a game or after the Lions win. There are several bars including the Phryst, Local Whiskey, the Saloon, and Liberty Craft House. Each of these bars is located close to Beaver stadium and has a variety of drinks to choose from. Penn State tailgates also include an event called the Fan Fest that offers games, giveaways, and the Dietz & Watson Tailgate Show, which discusses the day’s game. 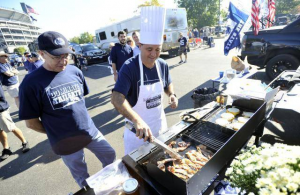 If there is one thing to expect at a Notre Dame tailgate it is team spirit. The Fighting Irish offer enthusiastic and exciting tailgating experiences such as the March Out where the band of the Fighting Irish march out to the stadium. This event follows a 15-minute concert where the band plays fight songs for fans such as “Hike, Notre Dame” and “Damsha Bua.”  Irish fans (and their RV’s) oftentimes also arrive the night before games and start tailgating in the early hours even for a late afternoon or evening game. 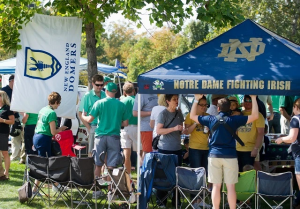 Tailgating at the University of Oregon is a relaxed, family-focused experience. But don’t let that fool you, as Duck tailgates provide plenty of cool activities to get you fired up for the big game such as the March to Victory in which the Ducks march to their locker room while fans cheer them on. Oregon also has a designated tailgate area known as the Mo Tailgate Center where dance competitions, live radio broadcasts, music, food, and drinks are all available. 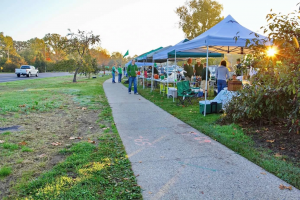 The University of Florida Gators and the University of Georgia bulldogs have had a longstanding football rivalry and play a game each year in Jacksonville, Florida. This game draws large crowds and is especially known for its tailgates. These tailgates have become known as the “World’s Largest Outdoor Cocktail Party” because of its size, the great weather and mix of two great Southern fanbases. You will often hear cheers for both teams and see RVs with decorations, lots of food and drinks, and excited Gator and Dawg fans! 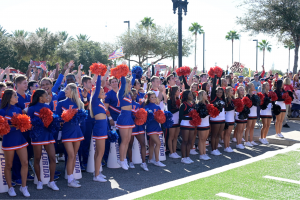